The history of St Pancras Chapel and its holy well 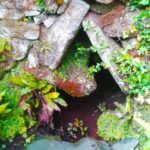 “This is an interesting well, with stonework of great antiquity. It has two slabs of stone over the top gable-shaped, but the stonework inside has fallen in somewhat, and is moss- and fern-grown. There is a never-ceasing supply of beautiful water, rising from the red sandstone. The well is in the garden of an old cottage – which was once a chapel and has always been known as St Pancras, and this was no doubt the dedication of the chapel.

“I would not say that the well was dedicated to St Pancras, but I should think it was older than the chapel. It is locally known as the Holy Well. This well is situated about a mile, or a little less, to the south of Cleeve Abbey.” 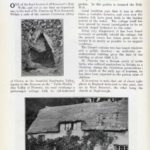 As Horne observes, the Grade II listed chapel was almost certainly built on the site of a pre-existing sacred spring (which has its own Grade II listing). Estimates of the building’s exact provenance vary, but the earliest estimate – from Clement E Kille, writing in The Somerset Year Book 1926 – refers to an “authority on ecclesiastical building” setting the date of construction at about 1200AD. This estimate matches the lancet (pointed) arch window in the oldest part of the building (now the sitting room), distinctive of the English period of Gothic architecture 1200AD–1275AD.

This is consistent with the origins of Cleeve Abbey – home to the monks who built the chapel – which was founded by William de Roumare, Earl of Lincoln in 1191AD (W Page 1911, A History of the County of Somerset: Vol 2 pp115-118 ) and established with a colony of 12 Cistercian monks in June 1198AD.

Who was St Pancras? 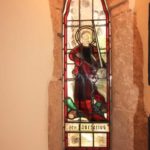 Kille expands on the dedication of the chapel: “St Pancras was a Roman youth of noble birth, who suffered martyrdom as a Christian, during the Diocletian persecutions; put to death at the early age of fourteen, he has since been regarded as the patron saint of children.”

Pancras – also known as Pancritas and Pancratius – lived during the rule of the Roman Emperor Diocles (284-305AD), who mounted fierce persecutions on the early Christian church. Around 303AD, Pancras was brought before the authorities and asked to perform a sacrifice to the Roman gods – but when he refused, from adherence to his Christian beliefs, the boy was beheaded. 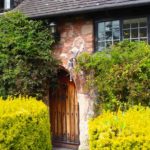 Nearly three centuries later, the cult of St Pancras started in England when Pope Gregory sent Augustine – a Benedictine monk who became the first Archbishop of Canterbury – to England in 597AD, carrying relics of the saint. (This is why many English churches are dedicated to Pancras – including St Pancras Old Church  in London and the railway station that bears the church’s name.)

In keeping with the usual iconography of Christian saints, St Pancras is depicted with a number of motifs: armour, a martyr’s palm branch, book, quill and sword. He is venerated as the patron saint of children, jobs – and health. In medieval iconography, St Pancras was interpreted as a young soldier, due to his association with the paired soldier saints Nereus and Achilleus – but Victorian portrayals emphasise his martyrdom.

The origins of the chapel 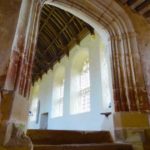 But it is St Pancras’s patronage of health that holds the stethoscope to the chapel’s location on the site of the holy well.

Local lore holds that the chapel was built to give respite and a place of prayer to pilgrims en route to Cleeve Abbey. But, as historians Teresa Pratt and Mark Densham point out, this does not stand the test of plausibility. St Pancras Chapel is scarce twenty minutes’ walk from Cleeve Abbey; even if the pilgrims were road-weary after a long and punishing journey – indeed particularly if this were so – why would they not push on for the last half mile or so, to the welcome and facilities of the abbey itself? 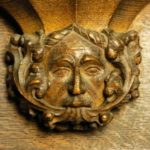 Instead, Pratt and Densham propose an alternative theory; that St Pancras Chapel was built as an oratory – a private place of prayer for the use of the monks and their agricultural workers, the lay brothers. Records show that Cleeve Abbey owned fields (RW Dunning 1985, A History of the County of Somerset: Vol 5 pp39-54) along the valley (Vallis Florida – “the Valley of Flowers” – as it was known), and a map of the monastery-owned fields clearly shows the agricultural territory south of Cleeve Abbey extending as far as the hamlet of Hungerford; and beyond, past the chapel, towards Roadwater.

The importance of the waters

Given the obligations of the religious life to attend to prayers at fixed times throughout the day, it would make sense for those working in the fields to pray somewhere closer to their place of toil, than to have to trek back to Cleeve Abbey and return to the fields after. 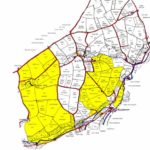 But Pratt and Densham also point out that a monastic presence upstream – where the waters from the holy well drained into the River Washford – would also exert a controlling presence over the course of a waterway essential to the monastery’s agricultural and industrial pursuits, such as brewing, pottery and milling grain.

But there is a complementary explanation for the site of the chapel and its dedication to St Pancras. The story of the spread of Christianity in England is largely one of cultural appropriation: Instead of attempting to deprogramme populations of their indigenous beliefs to replace with Bible teachings, the early Christian missionaries found it expedient – and perhaps less hazardous – to press existing pagan beliefs into the service of the Christian narrative.

Followers of the old religion were usually required to do little more than to change the names of their religious protagonists to Biblical characters, to escape eternal damnation. In this way, previously heathen populations proved relatively sanguine in accepting the missionaries’ message, accompanied as it was with promises of rather more earthly benefits; and the early church, building on its early successes, tightened its grip on the spiritual – and, notably, mercantile – affairs of the local population.

Returning to Horne’s observation that the chapel was built on the site of the sacred spring, consider this extract from treatise, The Folklore of British Holy Wells (Rowan 1996, Lughnasa):

“Many wells and springs had suitably Christian legends attached to them during the 7th – 9th centuries, during the main centuries of the struggle between Christianity (especially of the Celtic variety) and paganism, usually to ‘account’ for their discovery or origins.” 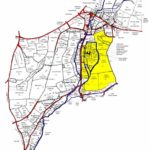 This tradition is obliquely referred to in the Ancient Monuments and Archaeological Areas listing schedule for the Holy well at St Pancras Chapel (DCMS 2002):

“The custom of venerating springs and wells as sacred sites is also known to have characterised pre-Christian religions in Britain and, although Christian wells have been identified from as early as the 6th century AD, it is clear that some holy wells originated as earlier sacred sites.”

The architects who dedicated the holy well to St Pancras took a very direct route to co-opting the creed of the locals who followed the old religion: Pagans believed the waters of sacred springs to have healing properties, as the Ancient Monuments listing continues:

“The holy wells sometimes functioned as sites for baptism but they were also revered for less tangible reasons, some of which may have had origins in pre–Christian customs – such as folklore beliefs in the healing powers of the water.”

And who better qualified than St Pancras – patron saint of healing – to legitimise the Church of Rome’s colonisation of these folklore beliefs? Building on the site of the sacred spring allowed the Cistercians to hijack the locals’ religious tenets and shape them after their own, while placing a controlling marker where the waters of the holy well joined the industrially significant River Washford. 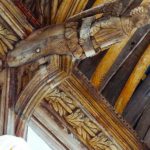 The ease with which the early missionaries appeared to convert large numbers of pagans in some parts of England perhaps speaks of the superficiality of the transformations. One converted Saxon noble was so enraged by the failure of the newfangled Christian god to bring him victory in war, he recanted his conversion and desecrated his own church.

And during a renovation of the refectory hall in Cleeve Abbey, restorers found that a 15th century carpenter, employed by the monastery to carve angels into the roof trusses, had also carved into the side of one such – in a position that could not be seen from the floor – the face of the pagan deity, the Green Man; and this more than two hundred years after the monastery had been built and England was – at least nominally – a Christian country.

“Well equipped property with comfortable beds and plenty of storage space. Lovely gardens, the children enjoyed catching the tadpoles and newts in the pond!”

=
We use technologies such as cookies to customise content and advertising, provide social media features and analyse traffic to the site. We also share information about your use of our site with our trusted social media, advertising and analytics partners. By navigating beyond this notice to the website, you hereby consent to the use of cookies and data transfer outside the EU. View our Privacy Policy